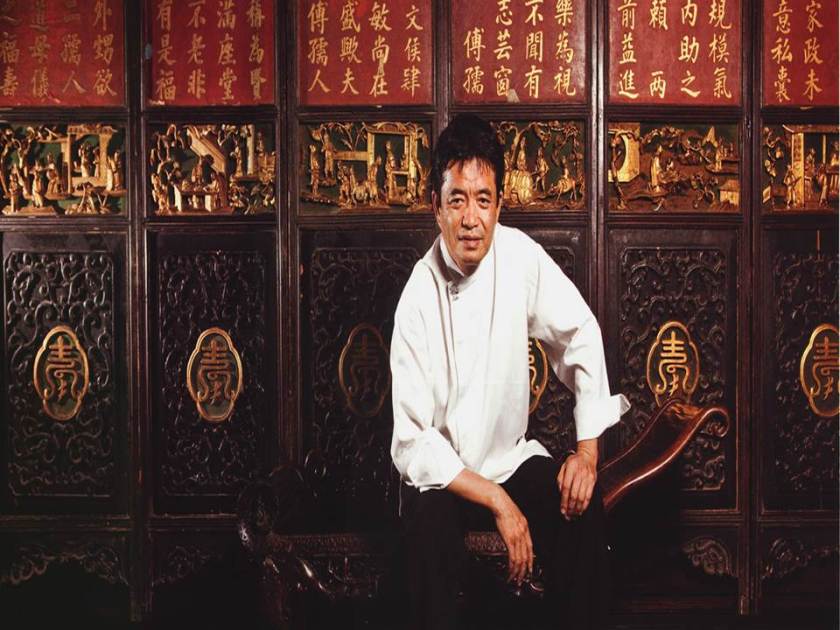 Here are the various dishes from the Set Menu. 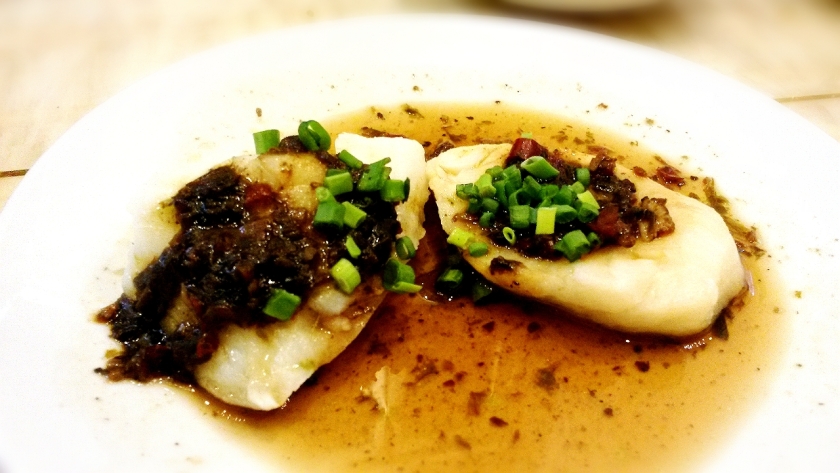 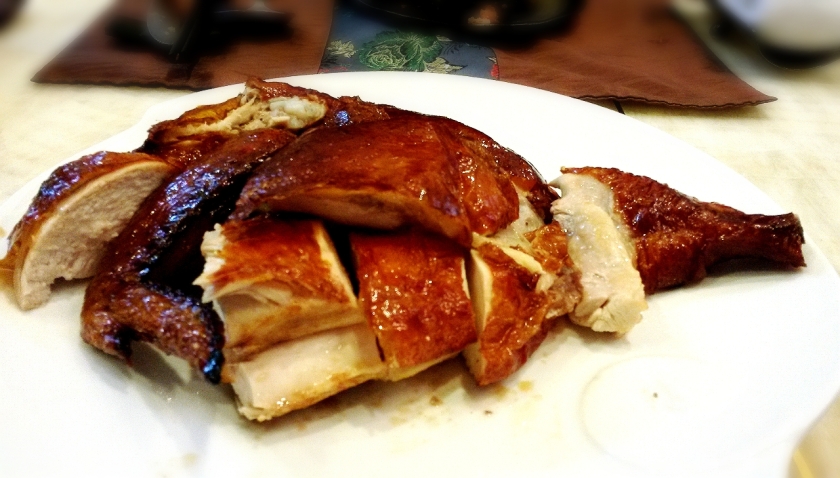 The chicken skin paper thin, crisp and full of flavour.

With his culinary and mastery skills,  the chicken fats normally found below the skin are magically rendered away.

The chicken meat so soft, tender and juicy is a joy to the palate. 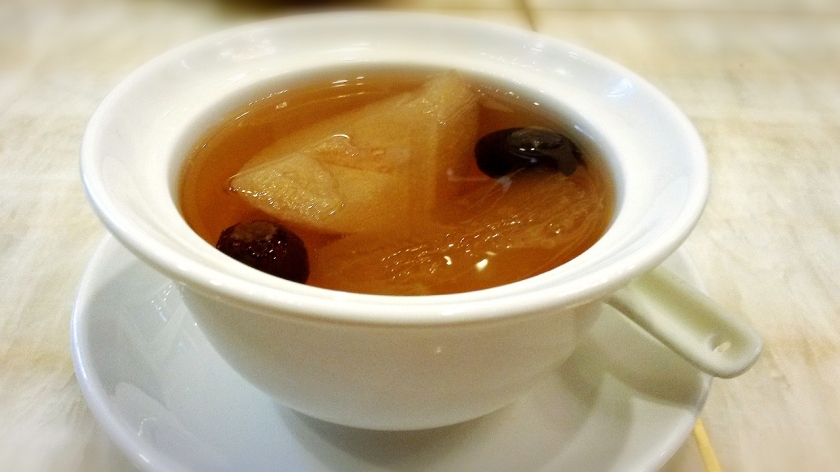 Not only the dishes satisfied the palate, the ambience of regal wooden screens, sideboards, golden chandeliers and antiques surrounded this sumptuous restaurant. 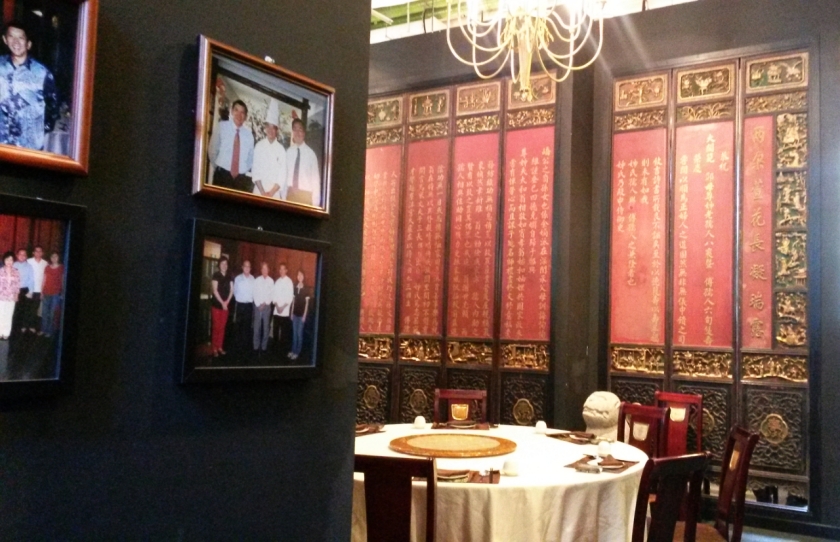 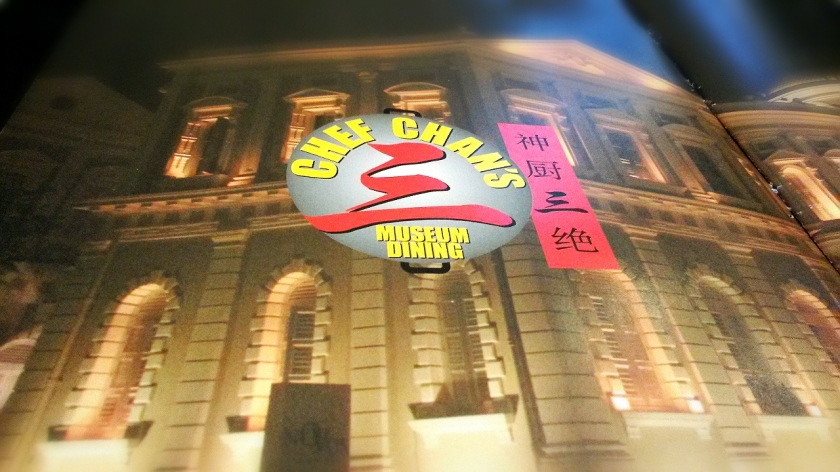 Getting that extra dose of antioxidants from these Chinese Red Spinach. 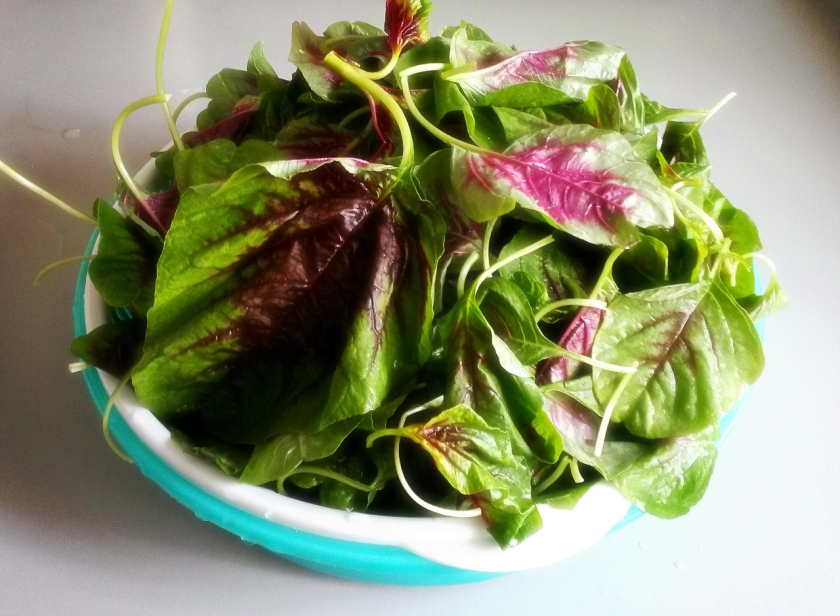 The chlorophyll found in these Chinese red spinach helps to cleanse the colon.

Chlorophyll helps to eliminate toxins from the body.

The lutein found in these spinach keep eyes healthy.

It is also a good source of Vitamin B, C and E, potassium, calcium, iron, magnesium and omega-3 fatty acids.

Here’s my no fuss nor special recipe to dish a healthy plate of vegetable.

All you need are two bundles of these Chinese Red spinach.

Sautéed with some minced garlic and dried shrimps with  a tablespoon of cooking oil. 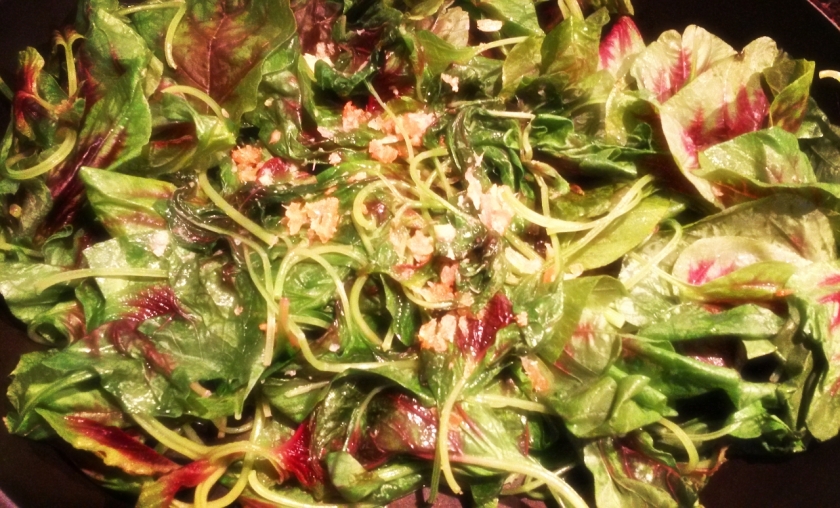 As these vegetables starts to cook, add about two tablespoons of home prepared chicken broth and some superior light soy sauce  to enhance the flavour of this veggie dish.

Once the vegetable is cooked.

Drizzle some Chinese cooking wine (Hua Tiao Chiew) alongside the wok before  trying to the serving plate.

A tasty and nutritious plate of vegetable within minutes.

Popiah is also a popular dish served for home parties and during Chinese New Year due to the concoction ingredients  and sharing session while wrapping a piece of Spring Roll for yourself.

Here’s a simple spread of the popiah preparation.

You can use a candle food warmer for the popiah filling. 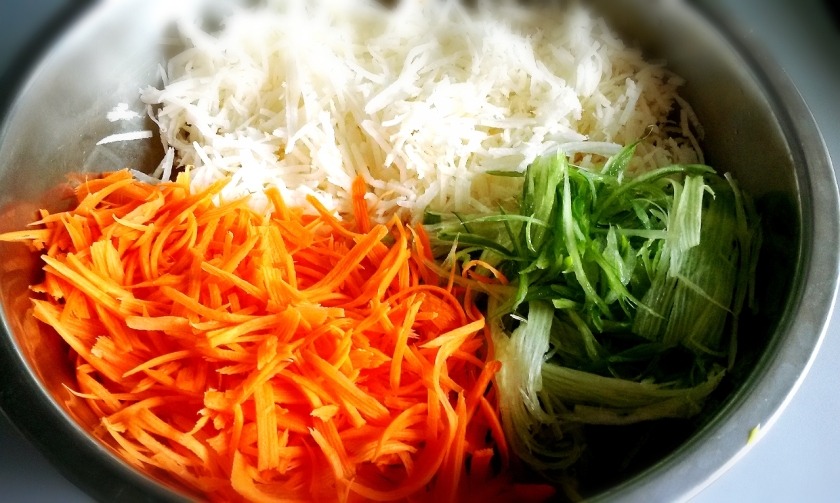 A handful of cilantros (chopped) 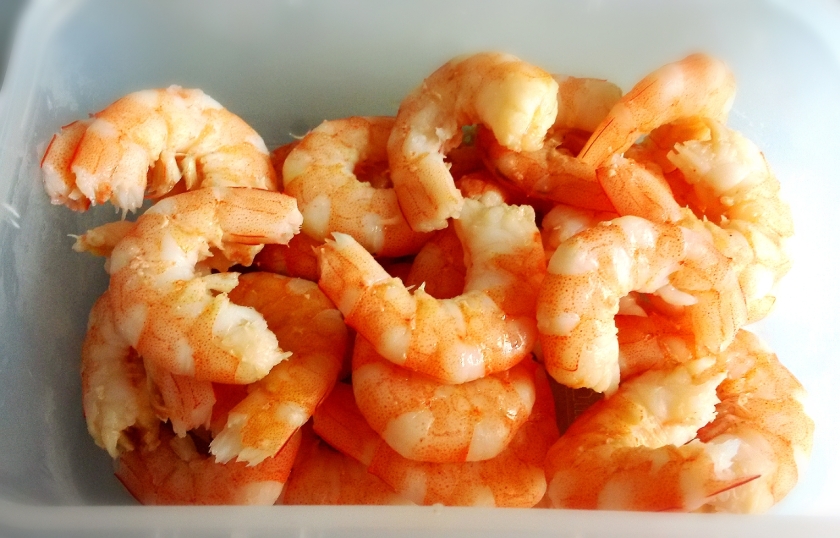 Do not discard the prawn shells. 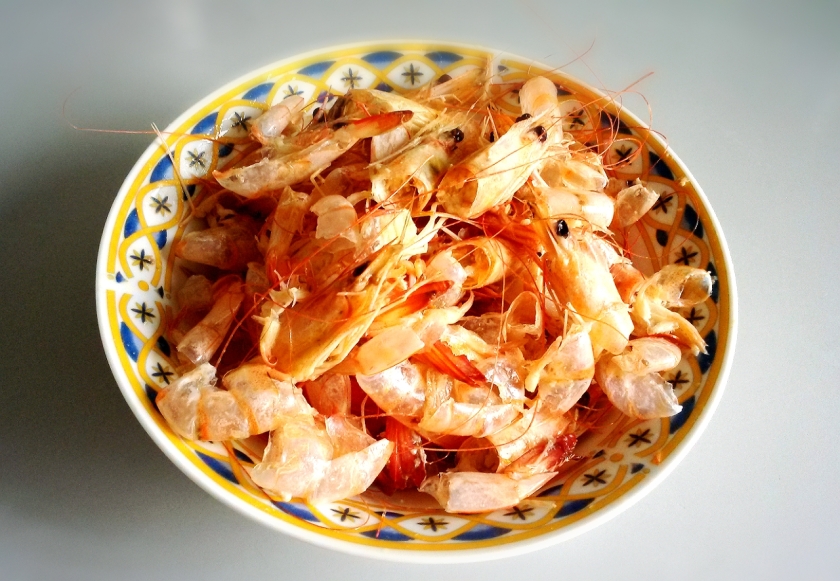 In a pan, add some minced garlic and fry the prawn shells and add some water and bring to a boil. Drain the shells and keep the prawn stock to be added to the popiah filling.

Add the vegetable ingredients together with three tablespoons of grounded bean paste and some coarse sugar and mix well.

Pour alongside the wok the prawn shell stock and blend well.

Cook until the vegetable softened. 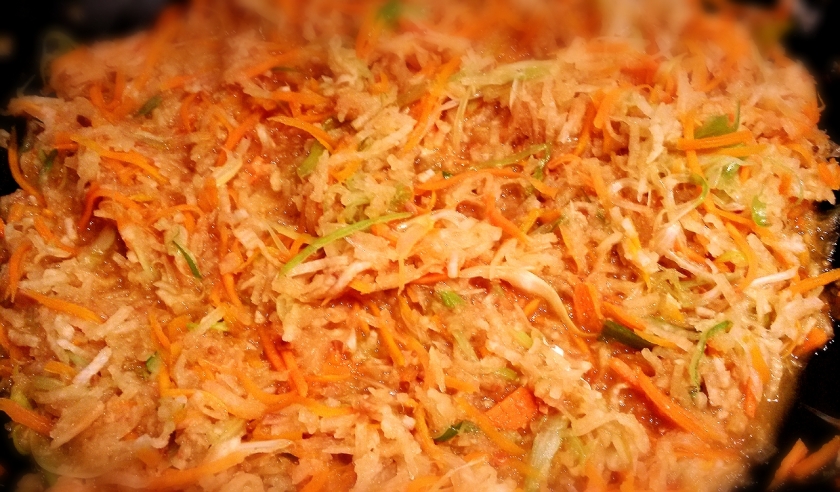 Turn off the heat and transfer the popiah filing into a saucepan.

Blend the fresh red chillies together with a teaspoon of apple vinegar to a smooth paste.

Lay a piece of the Popiah wrapper on a flat plate.

Add a large piece of Chinese lettuce and spread a small portion of sweet sauce and your desired amount of home prepared chilli sauce over it.

Spoon about 2 to 3 tablespoons of  the Popiah fillings onto of the lettuce.

Fold up the two sides of the wrapper and roll up.

For more ideas on how to use these Spring Rolls Sheets, check out here.

At the end of the day what have I got, a successful Singapore.

A must watch video – The Man With A Big Heart.

In life, its not how you begin your journey, its how you ended.

Your legacy will live on forever. 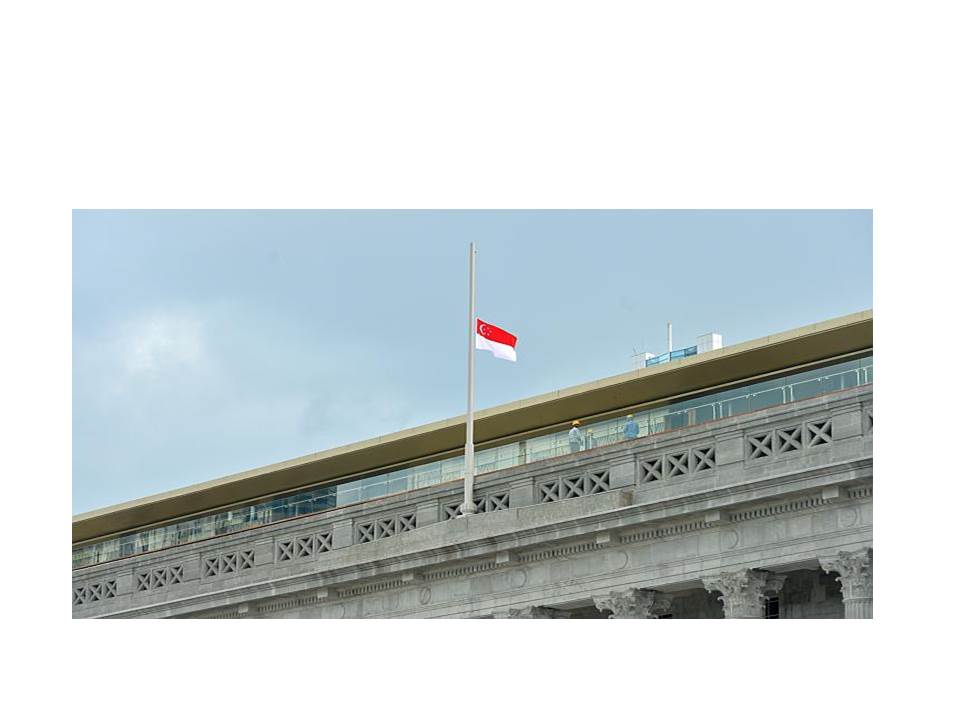 “We, the citizens of Singapore,

pledge ourselves as one united people,

regardless of race, language or religion,

to build a democratic society

based on justice and equality

so as to achieve happiness, prosperity and

progress for our nation.”

Initially penned by Mr. S Rajaratnam in 1966, the Pledge was written against the backdrop of racial riots in the 1950’s and 1960’s

From August 1966 onwards, students began reciting the National Pledge before the start of each school day. As not many schools then had open areas for morning assemblies, the Pledge was initially recited mainly in classrooms. Today, the Pledge continues to be an integral part of Singaporean life and is recited by students during flag-raising and flag-lowering ceremonies as well as on important occasions such as the National Day Parade and National Day Observance Ceremonies. 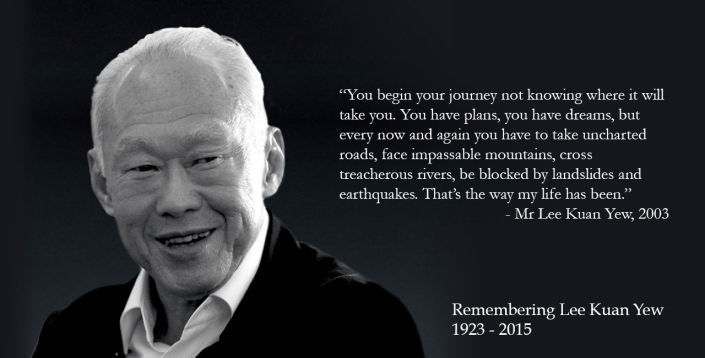 A week of reflection, a week of tears shedding, a tough week for Singaporeans.

Eternal rest, grant unto him O Lord and let the perpetual light shine upon him.

May he rest in peace. 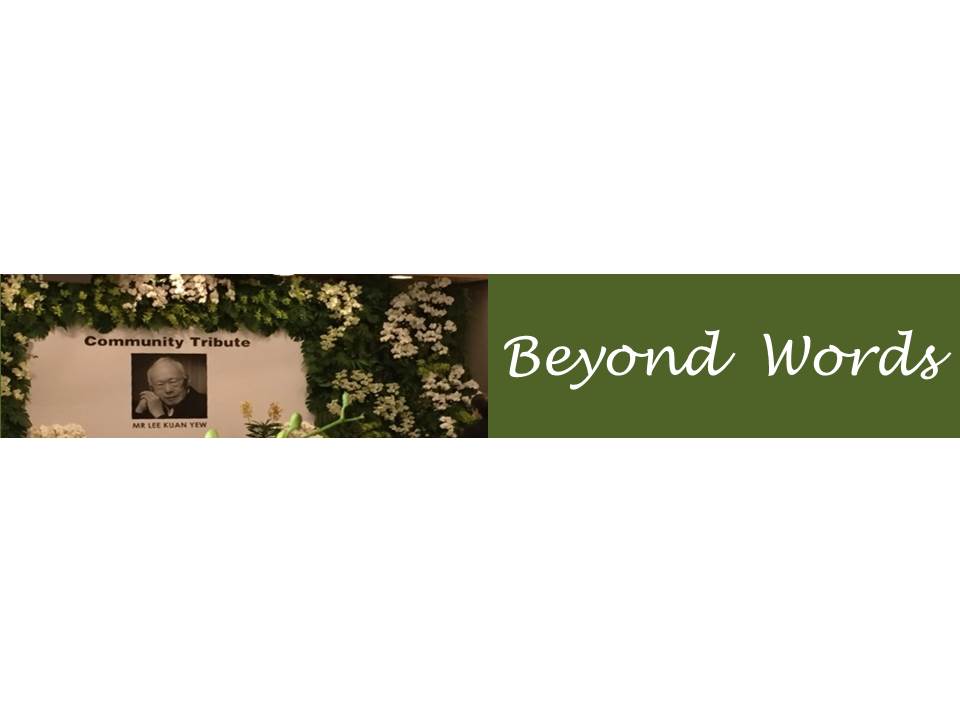 Kudos to all the photos taken by the individual photographer.

A light projection tribute of the late Mr. Lee Kuan Yew on the exterior of unique heritage of The Fullerton Hotel.

The Fullerton Building aka the Grand Old Dame once home the nation’s General Post Office, The Exchange, Chamber of Commerce and The Singapore Club, all of which played a pivotel role in the History of Singapore.

The site of General Post Office (GPO) built in 1928 was turned into a 400 room luxury The Fullerton Hotel after S$400 million makeover and officially opened in January 1, 2001. 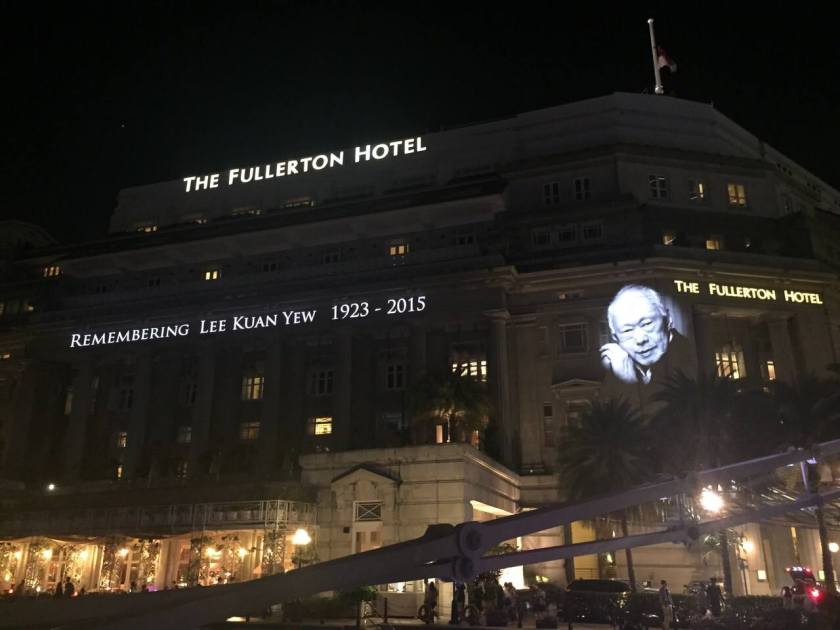 The snaking queues as the citizen of Singapore and visitors trying to make their way to Parliament House to bid our great leader “Goodbye”.

A night view of City Hall where part of the long queue was formed to get to the Parliament House.

The ancestral home of the late Mr. Lee Kuan Yew in Dabu, Guangdong (China)  to convert into a tourist attraction.

Work on the project started in 2014 and the first phase which comprises of a Lee Kuan Yew Memorial Hall due to be completed by end of 2015.

Singapore would not be known as “The Garden City” without the hard work of our late First Prime Minister Mr. Lee Kuan Yew.

The late Mr. and Mrs. Lee Kuan Yew favourite fragrance “bread flower”   wafting through the garden of the Istana.

Credit to the owner of this video.

The late Mr. Lee specifically requested to plant these fragrant climbers at the Istana function lawns so that all guests can enjoy their fragrance.

The late Mr. Lee Kuan Yew spearheaded the initiative to “green up Singapore” with fast growing species so that they are able to provide shade and soften the concrete landscape of the island in the shortest time.

Parks were created in the city, road codes were introduced to ensure the trees are able to be planted along the new roads.

Parks and Tree Unit  (now known as National Parks Board) renamed in July 1996 was set up in 1967 and so was the Singapore Botanic Gardens.

New parks were introduced and existing ones enhanced with extensive network of park connectors to link to all our parks and green spaces together.

In 2013 the National Parks Board marked its 50 years of tree planting and greening Singapore.

The late Mr. Lee yearly would participate in the tree planting campaign an unbroken tradition. 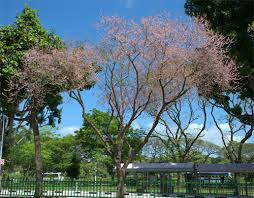 Mr Lee Kuan Yew planted his first tender sapling on June 16, 1963. When he bedded down the little Merparti tree in Farrer Circus, a traffic roundabout, he also seeded a civilised garden city in an unruly land. In season, the tree, a native of dank South-east Asian jungles, was crowned with pale pink blossoms that looked like Sakura.

At the Istana, Mr. Lee specified that he did not want chemical fogging because it would kill the insects and that the birds feed on. He wanted the population of mynah birds on the Istana grounds to be reduced so that the singing birds such as magpie robin can thrive there.

On Wednesday, March 25, 2015 , Mr. Lee’s final journey as he leaves the Istana ground for the laying in state at Parliament House.

The magpie robins were singing and bidding “goodbye”  as he passes by.

Describing Mr Lee as “the Chief Gardener of Singapore’s Garden City”, National Development Minister Khaw Boon Wan said the making of a Garden City was a key element in Mr Lee’s development strategy, which differentiated Singapore from other cities and set a benchmark for other cities to emulate.

Yesterday, choking back tears, Mr Khaw Boon Wan  said without Mr Lee, “there would be no Garden City”. Minister of State for National Development Desmond Lee reiterated that Mr Lee believed that greenery and lush verdant landscapes were essential in a city to “calm the spirit and to make people feel relaxed”.

“You look around us… This is something that requires foresight and a deep abiding passion, not only for our natural heritage but also for the spirit of our people,” he said. 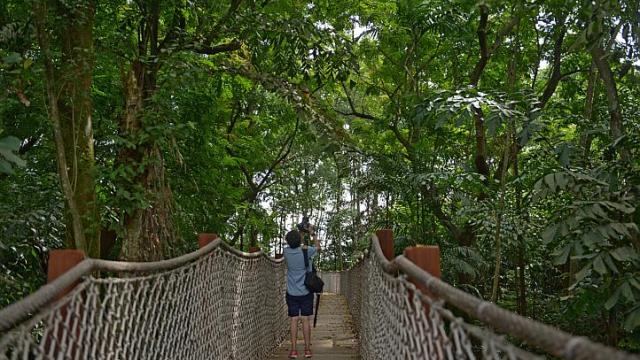 The grandeur of the internationally renowned Singapore Botanic Gardens established by Sir Stamford Raffles in 1822.

Our Founding PM Lee Kuan Yew loved nature and visited the Singapore Botanic Gardens whenever he could going around in the buggy.

Visit Gardens by the Bay, one of the Top 10 Indoor Gardens of the World, arguably the nation’s most beautiful masterpiece.

This sprawling garden in the city provides mesmerising waterfront views across three gardens, spanning over 101 hectares of reclaimed land.

We will always remember the Chief Gardener of Singapore Garden City.

Just as I finished summing up this blog page, learnt that a tree was planted at Gardens by the Bay this morning, Friday, March 27, 2015 in memory of Singapore’s  founding Prime Minister Lee Kuan Yew. 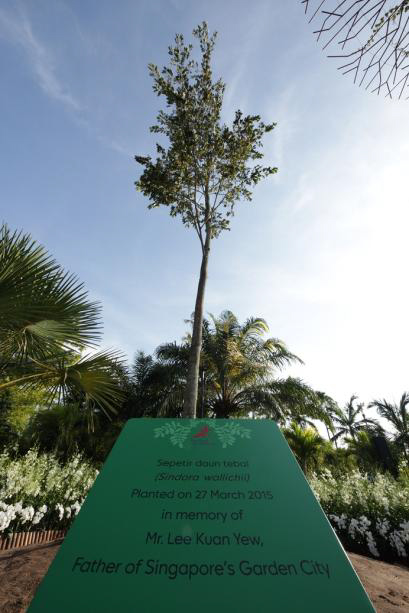 The tree planting ceremony saw the planting of a Sepetir daun tebal (Sindora wallichii) at the Golden Garden near the main entrance to Gardens by the Bay. The tree is a species native to Singapore’s primary forest and was meant to be planted by Mr Lee during a planned visit earlier this year.

Celebrations will recognise the spirit of the people, past and present, who have helped build the nation – SINGAPORE.

A touching Rendition of “Home” one of the most popular Singapore National Day Parade song sung by the choir of St. John’s College, Cambridge.

A tribute to Mr. Lee Kuan Yew at Parliament House.

A memorable photo of the late Mr. Lee Kuan Yew at 2014 National Day Parade. An event he never missed for the last 49 years.

Future national days will never be the same “without you”.

Whenever I am feeling low

I look around me and I know

There’s a place that will stay within me

Wherever I may choose to go

I will always recall the city

Know every street and shore

Sail down the river which brings us life

Winding through my Singapore

This is home truly, where I know I must be

Where my dreams wait for me, where that river always flows

This is home surely, as my senses tell me

There is comfort in the knowledge

That home’s about its people too

So we’ll build our dreams together 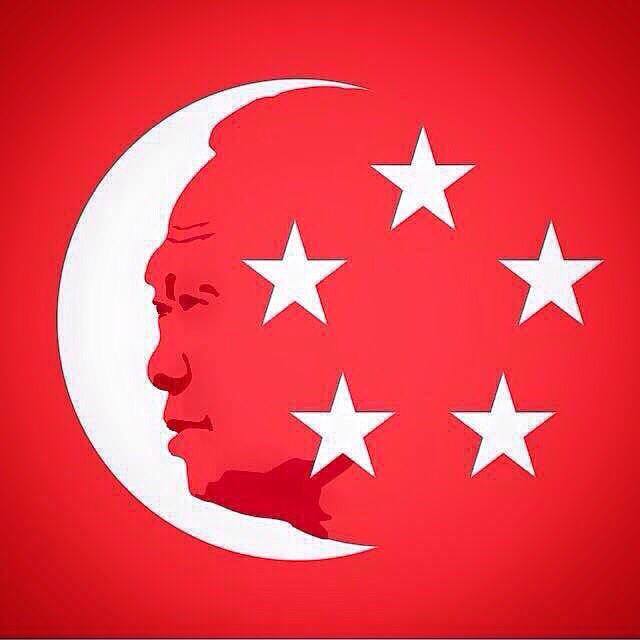 The national flag of Singapore was first adopted in 1959.

The Singapore flag is horizontally divided into two bars with red over white.

In the upper left quadrant is a crescent moon in white, facing a pentagon of five white stars.

The flag was designed with meanings to each specific segment. 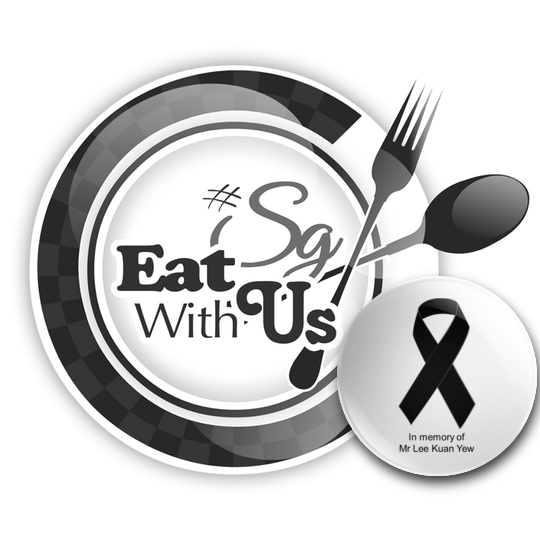