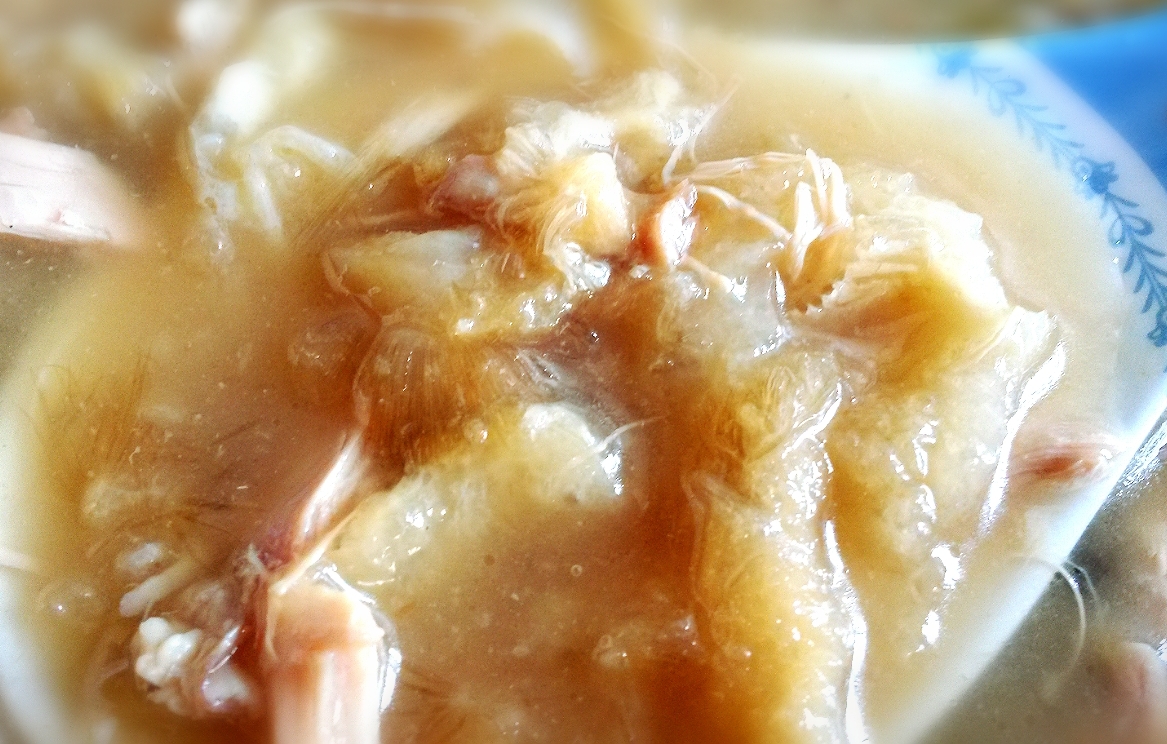 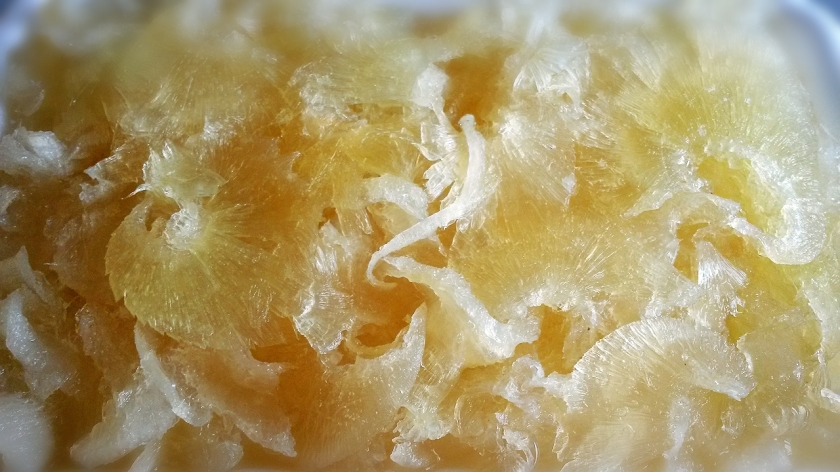 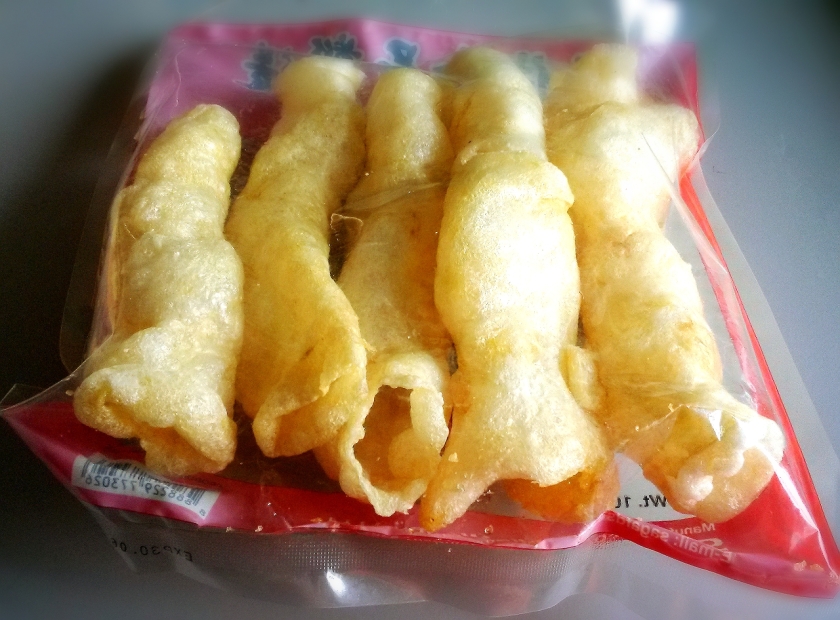 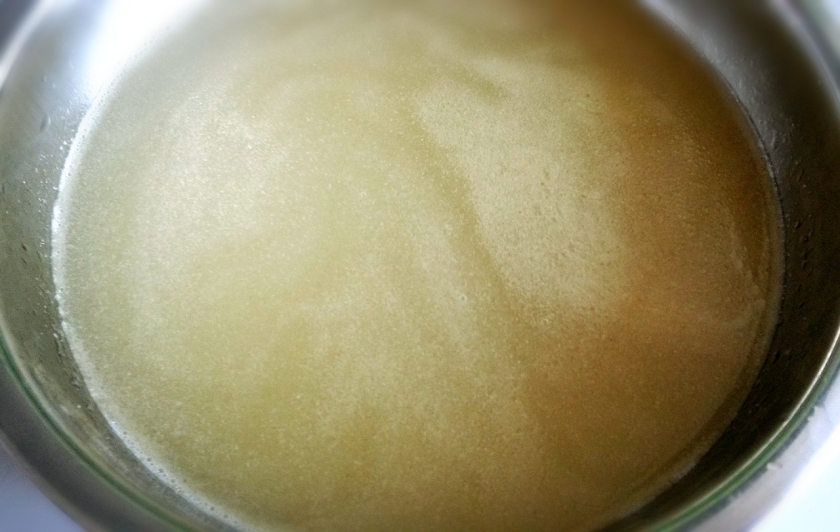 Soak the fish maw in warm water until softened and squeeze the excess water from each tubular to get rid of the oil.

Slice the soaked fish maw into slices and set aside.

Thaw the frozen shark fin and rinse with tap water and leave in the colander to drain the excess water.

Marinate the shark fin with some sesame oil and 1 tablespoon of oyster sauce.

Steam the marinated shark fin in a steamer for about 10 minutes.

Pour the concentrated chicken stock into a pot and bring to a boil.

Add the sliced fish maw and shark fin together for about 8 to 10 minutes. 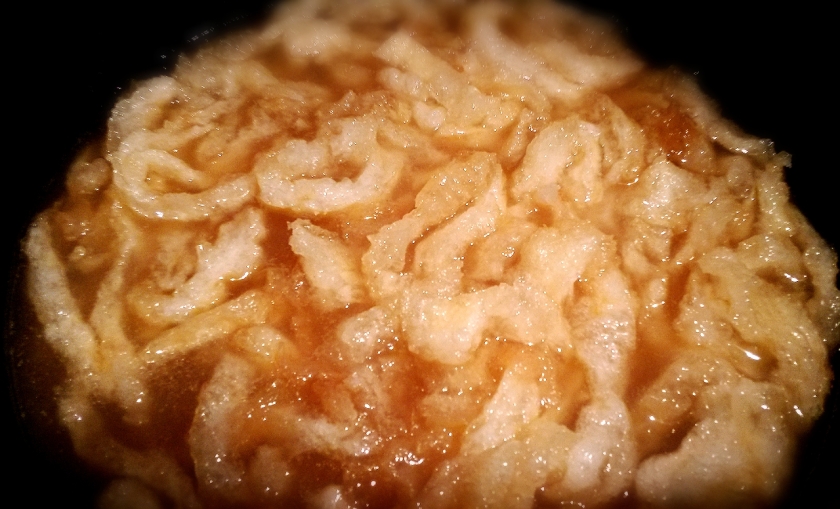 Thereafter, include the shredded chicken and simmer or another 5 to 8 minutes.

Include your desired amount of vinegar, sea salt and sesame oil. 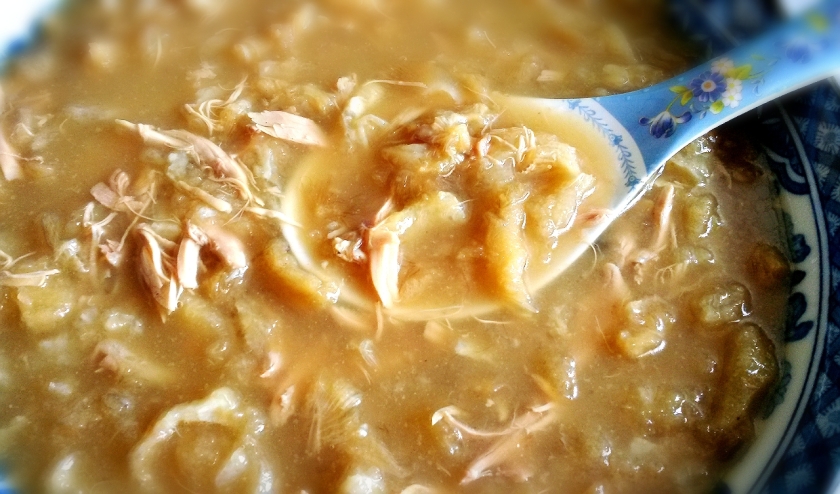 You can adjust the seasoning and the tapioca starch to your own preference.

More vinegar can be added together with a dash of grounded pepper before serving.

Shark fin soup is a traditional Chinese delicacy associated with prosperity, honor and good fortune is served at important occasions such as corporate banquets, weddings, and New Years celebrations. 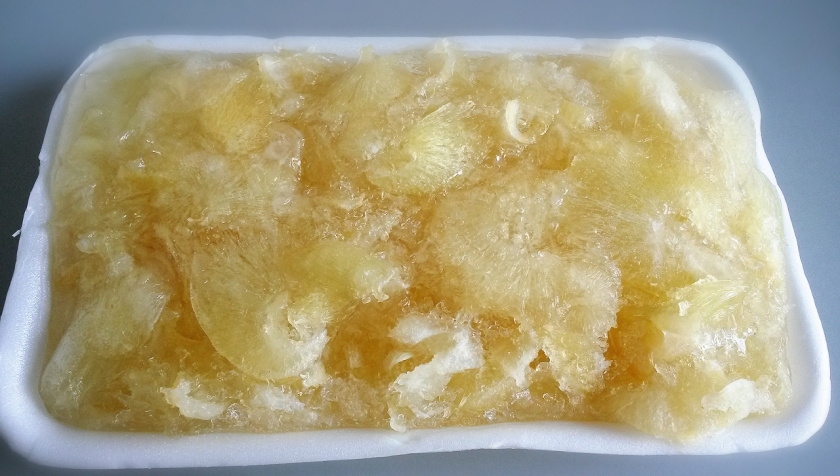 Leave the steamed crab to cool and extract the meat and set aside.

You can also store the crabmeat in the freezer before cooking.

Quick rinse the shark fin with tap water and drain in the colander. Set aside.

If you have frozed the fresh crabmeat, leave it to thaw to room temperature.

Marinate the shark fin and crabmeat with a tablespoon of sesame oil, dash of sea salt and grounded white pepper and superior light soy sauce. Mix them well and plate them in a metal plate to steam for about 10 minutes.

When done, remove from the steamer and set aside.

Pour the steamed shark fin and crabmeat into the pot and stir well.

Simmer for about 10 minutes over medium low. 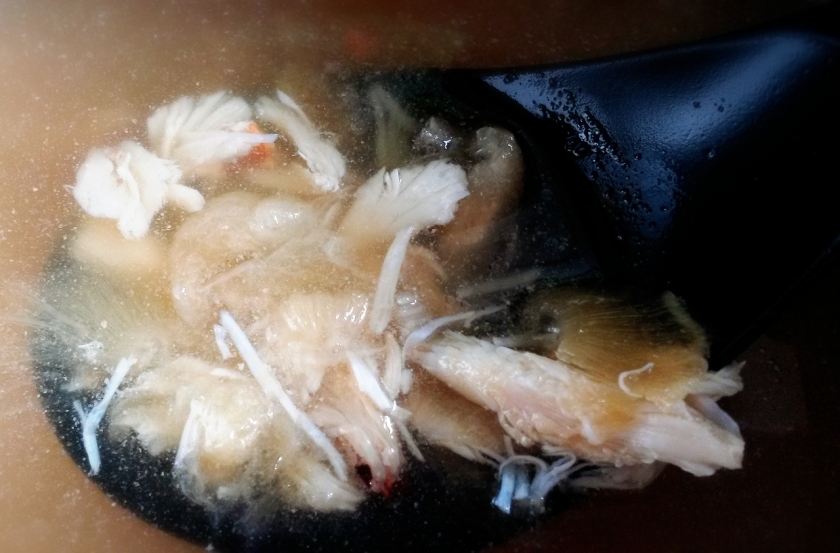 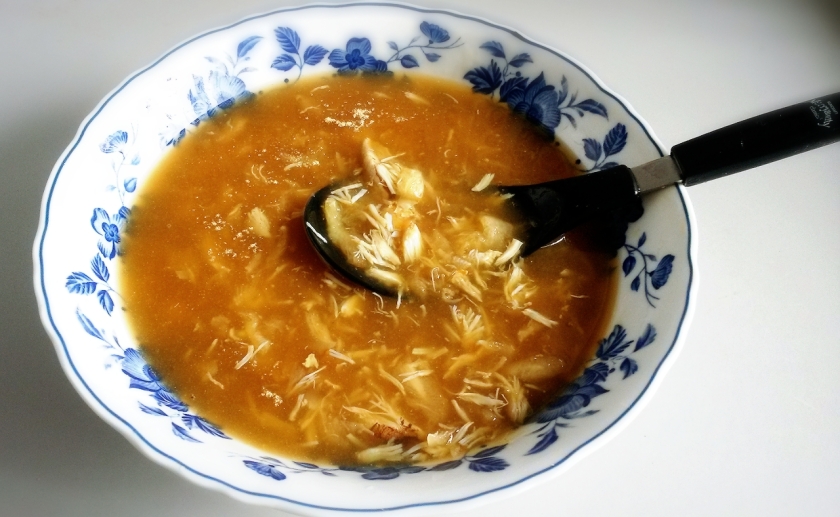 Before turning off the heat,  add tapioca flour with water to the Shark Fin soup and stir thoroughly.

Taste and adjust the seasoning to your own doneness.

It is important to use fresh crab meat for this dish.

Shark fin was created by an emperor during the Sung Dynasty as far back as AD 968.

Chinese Emperors loved this shark fins because the product is rare, tasty and difficult to prepare.

Laborious hours of cooking the fibrous shark fin to make it tender and delicate. Mixed with fresh crabmeat and seasonings to create a thick and rich flavourful soup. Shark fin is eaten for its texture and cooking it right requires culinary skill.

Shark Fin soup is considered to be one of the “Treasures of the Sea” in Chinese traditional cuisine.

Thaw the frozen shark’s fin in a small basin of water for an hour.

Drain in the colander to dry.

Marinate the shark’s fin with superior light soy sauce and a teaspoon of sesame cooking oil.

Steam the marinated shark’s fin for about 10 minutes.

Drain the gravy from the steamed shark’s fin into a small bowl and set aside.

Clean, trim and wash the crayfish.

Boil the crayfish tails  and de shelled  meat and set aside. 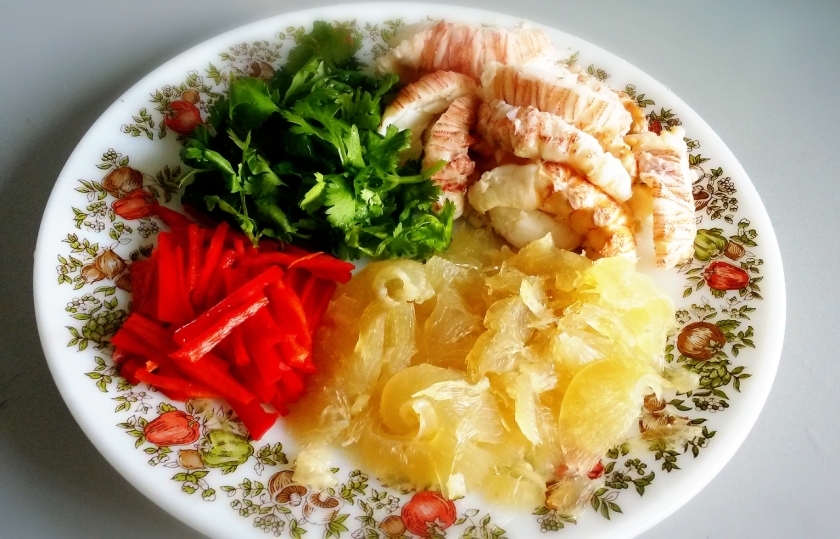 Beat 3 eggs into a bowl.

In a non stick pan, add the marinated shark’s fin and quick fry for a few minutes. Set aside.

Heat up wok and add in some cooking oil and fry a tablespoon of minced garlic till fragrant.

Lightly stir in the crayfish meat for about a minute. Scoop the cooked crayfish into a plate.

Pour in the beaten eggs mixture into the work and continue to stir until the eggs starts to cook.

Break the eggs into smaller lumps and ensure the eggs are fully cook.

Toss in the shark’s fin, crayfish and do a quick stir.

Add a teaspoon of Hoisin sauce and mix well.

Dish out the ingredients into a serving plate.

Keen to prepare your own Shark’s Fin with Superior Broth, click here for the details. 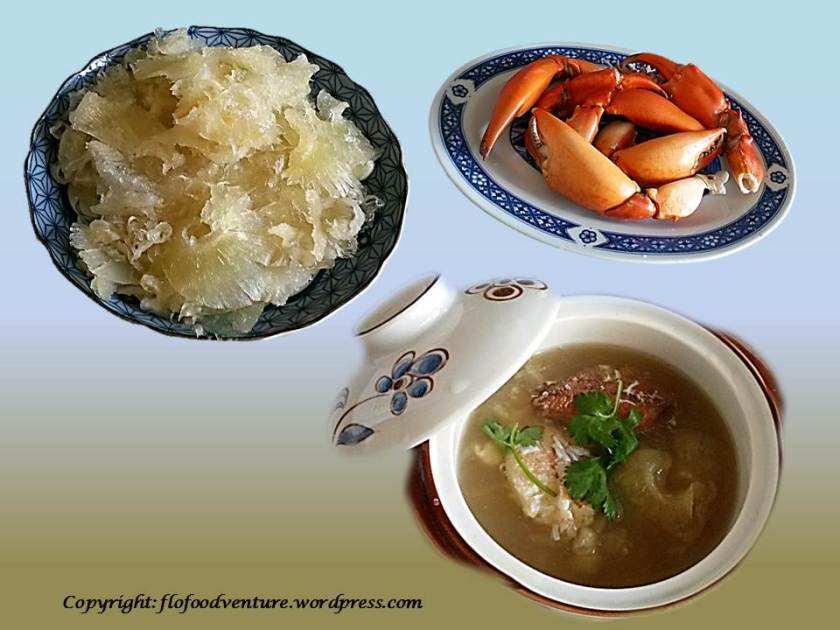 Steam the fresh crab pincers until all the shells turned orangy red. Leave it to cool.
Break the shell and extract the crab meat and set aside.
Add about three rice bowls of concentrated chicken broth into a pot together with shark fin.
Bring to boil.
Reduce heat and simmer for about 10 minutes.
Add the crab meat and soy sauce and another one and half rice bowls of concentrated chicken broth and potato starch mixture.
Bring to boil and stirring occasionally.
Reduce heat and simmer for another 5 minutes.
Serve with black vinegar or brandy if desired.

Do not add to much water to the chicken broth. The concentrated chicken broth is the key ingredient to this dish. The broth will add flavour to the ingredients.

Check out here on how to prepare concentrated chicken stock.