For a twist in this dish, I have decided to use a can of Abalone.

Par boiled the two wholesome abalone for  a few seconds, drained and sliced them thinly. 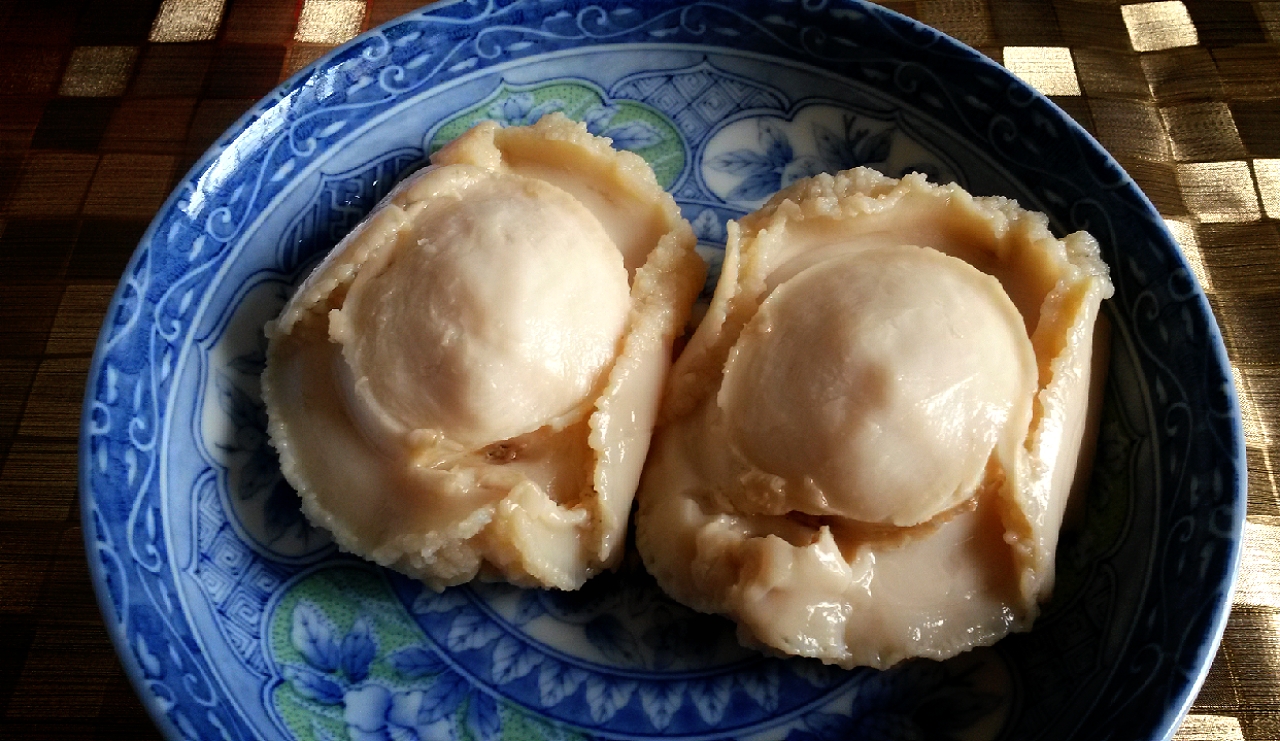 Bought a medium piece of very fresh Tako and have it sliced.

The usual Yu Sheng condiments are now readily available at our local supermarkets and wholesaler.

Specially packed individually such as red, green and yellow ginger and pickles.

Decorate the serving plate with all the ingredients. 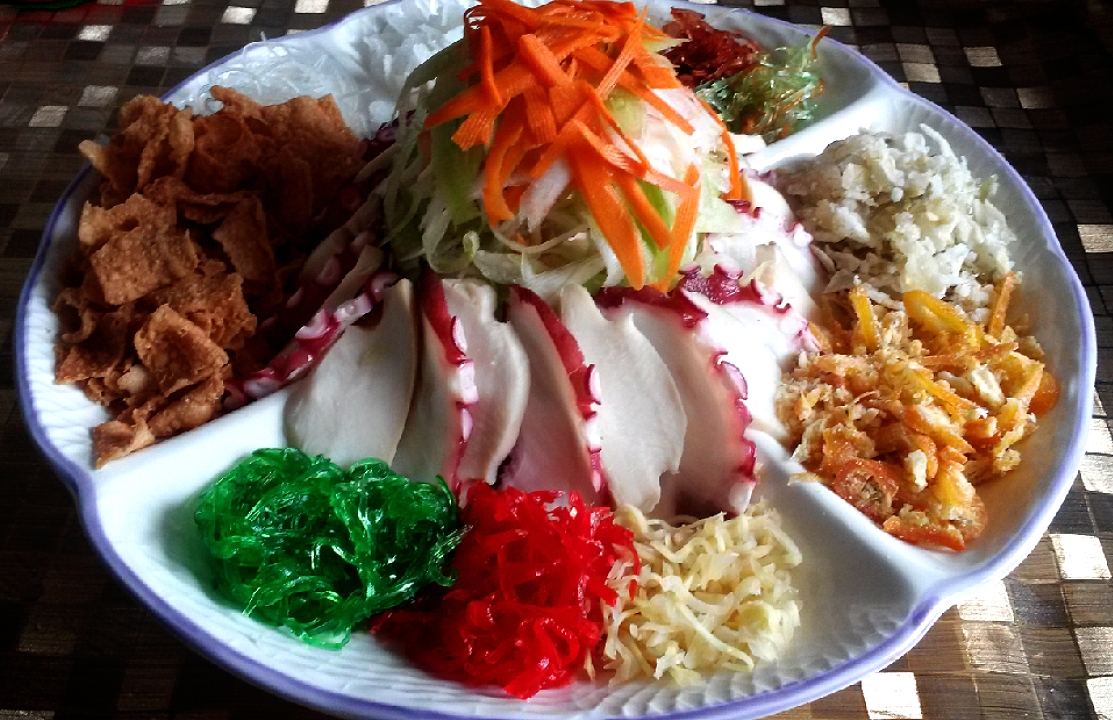 Looking at the Yu Sheng from different angles. 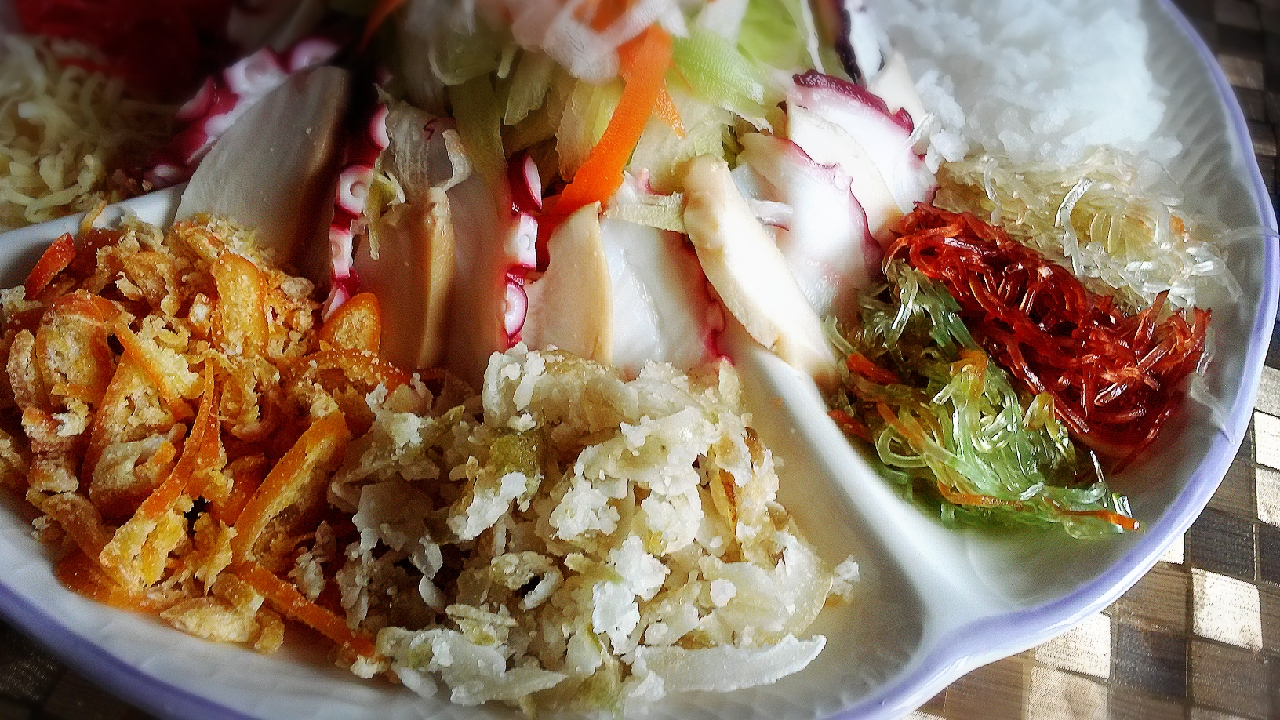 Mixed the condiments and ingredients and its ready to toss.

Check out this link for the 12 Steps to Lo Hei.

Check out this link The History of Yu Sheng

Welcoming the Year of The Goat with different types of Yu Sheng serving.

As we are approaching the last day of Chinese New Year, Yu Sheng ingredients are going on sale. One for one deal at NTUC Fairprice sold on the eve of Chap Goh Mei.

The ingredients included in each packaging. 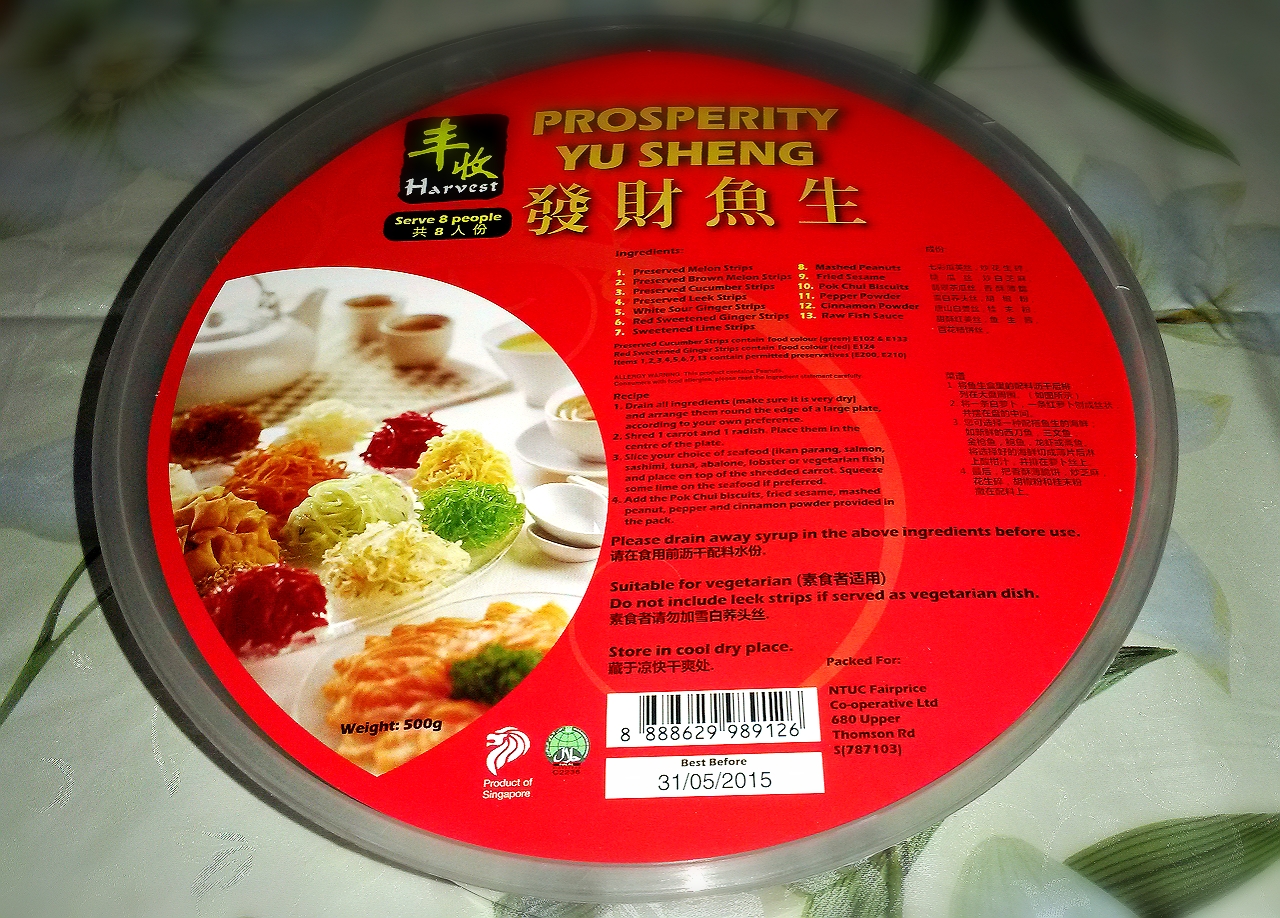 Mashed peanuts, pepper powder cinnamon powder and the raw fish sauce are included in each packaging.

For this first packet, I have decided to go with “Smoked Salmon” instead of raw salmon.

For the second complimentary set, I decided to use three coloured vegetables, white radish, carrots and green radish. 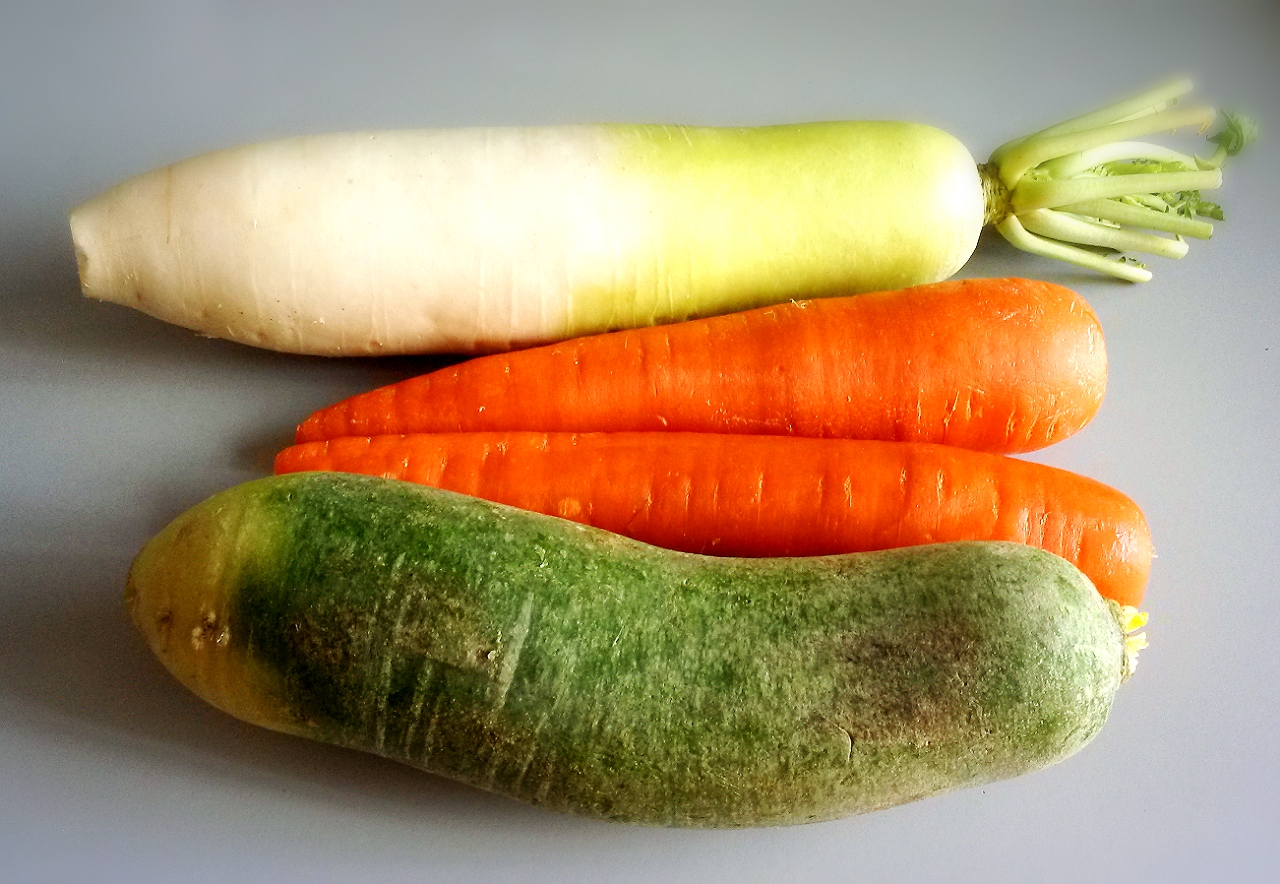 The three coloured vegetables are shredded and combined together with the Yu Sheng ingredients.

To be tossed with fresh steam prawns 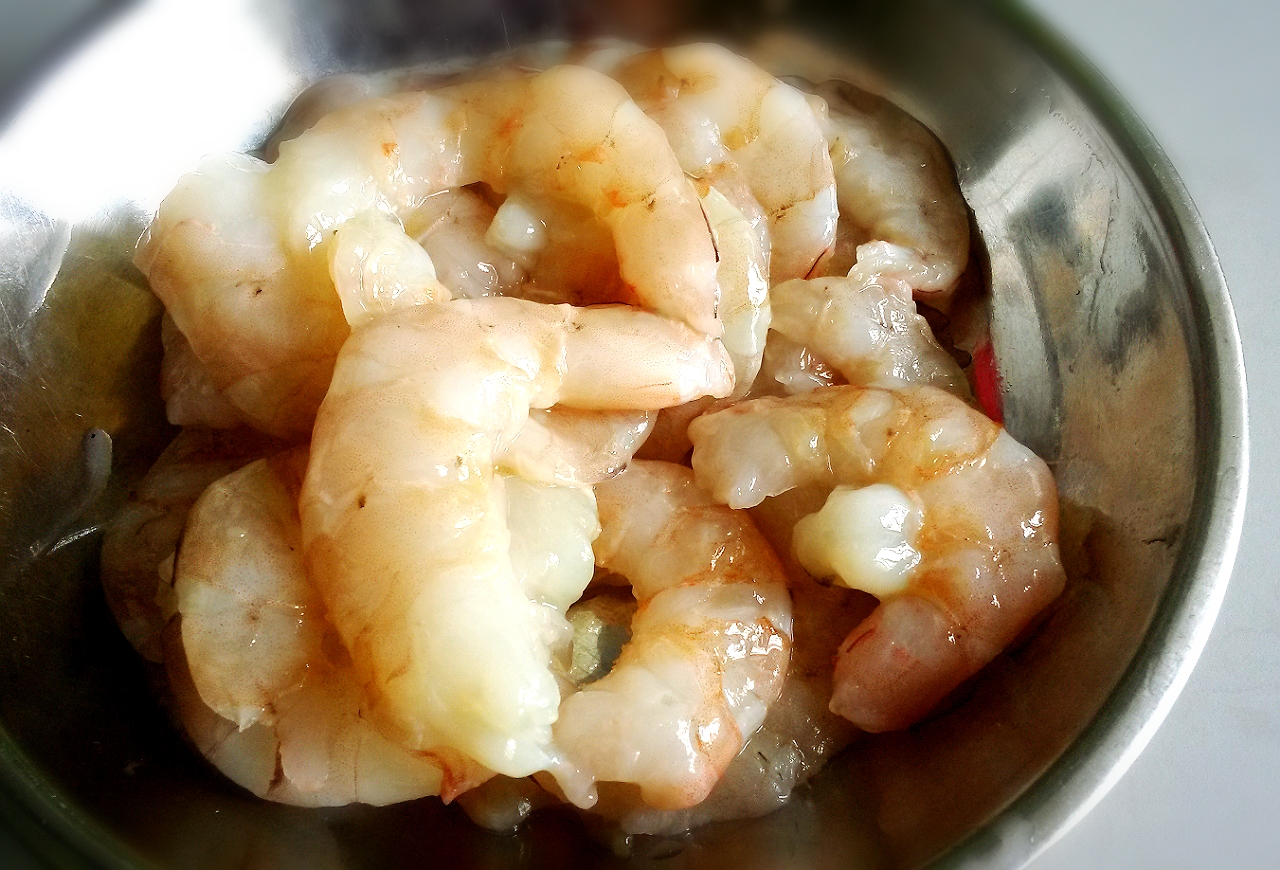 These are the colourful ingredients in each packaging.

Tossed all the ingredients together before serving. 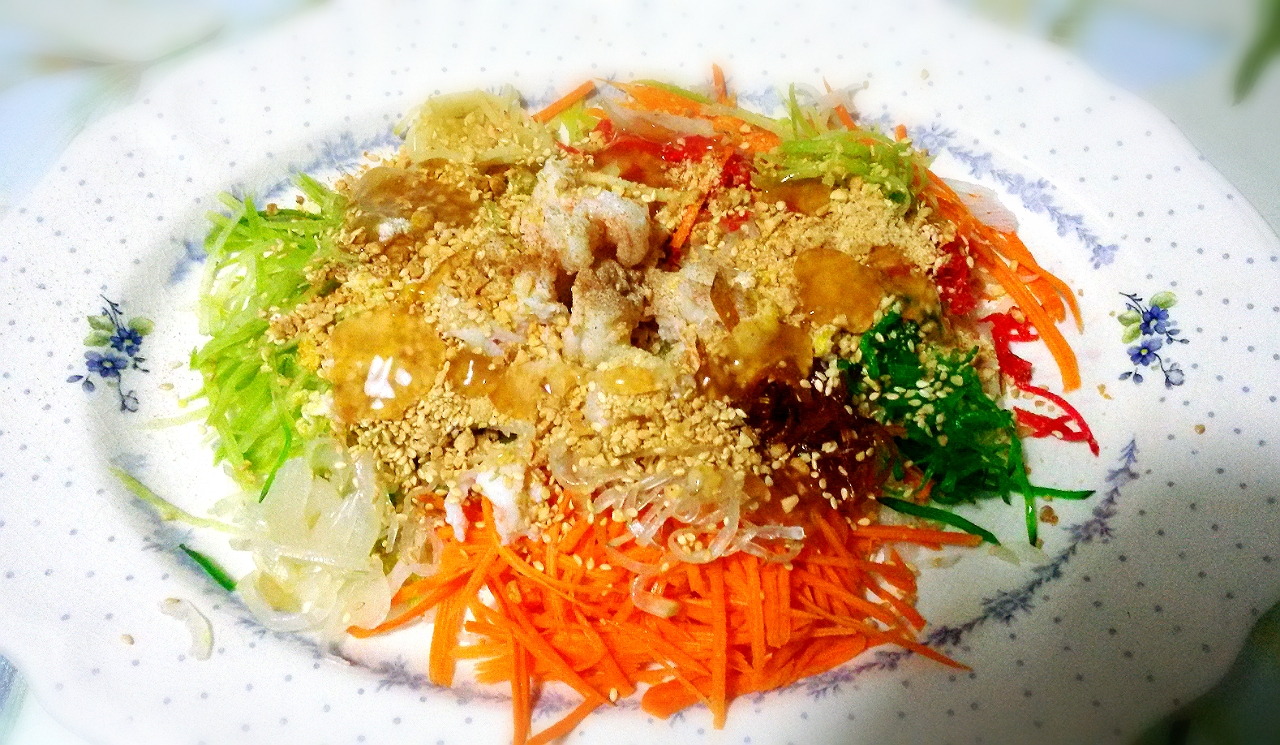 Have you wondered who invented Yu Sheng (Raw Fish).

On the seventh day of Chinese New Year, it has been my family tradition to order a packet of “take away”  raw fish (Yu Sheng) from Putien for our dinner.

Simply because Putien Yu Sheng has more flavourful twist with its signature seaweed. Specially flown in from the city of Putian (Fujian Province, China)  as one of the key ingredients for their colourful raw fish combination.

Also voted to be one of the top 10 restaurants providing Yu Sheng.

Two containers of signature seaweed was included in this order.

Check out here on how to toss Yu Sheng.

For more information about Yu Sheng and its symbolism, check out here. 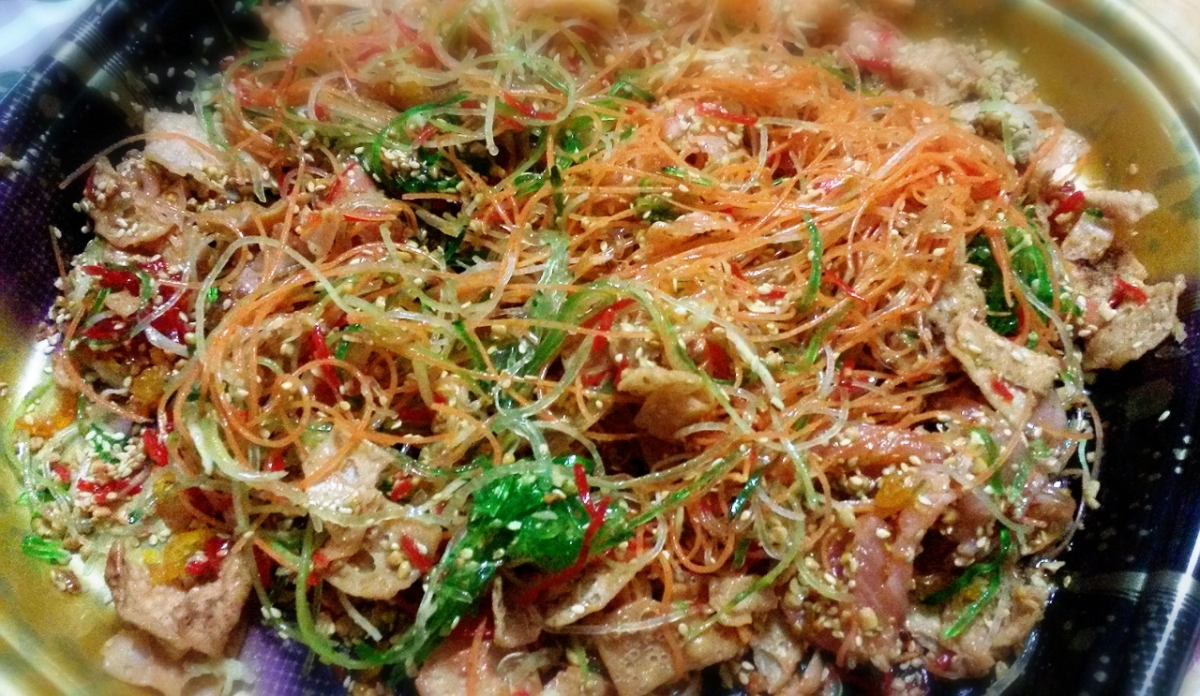 This year I bought a fresh  pre-packed Yu Sheng from Cold Storage.

Fresh Norwegian Salmon frown in from the cold clear water of Norway. 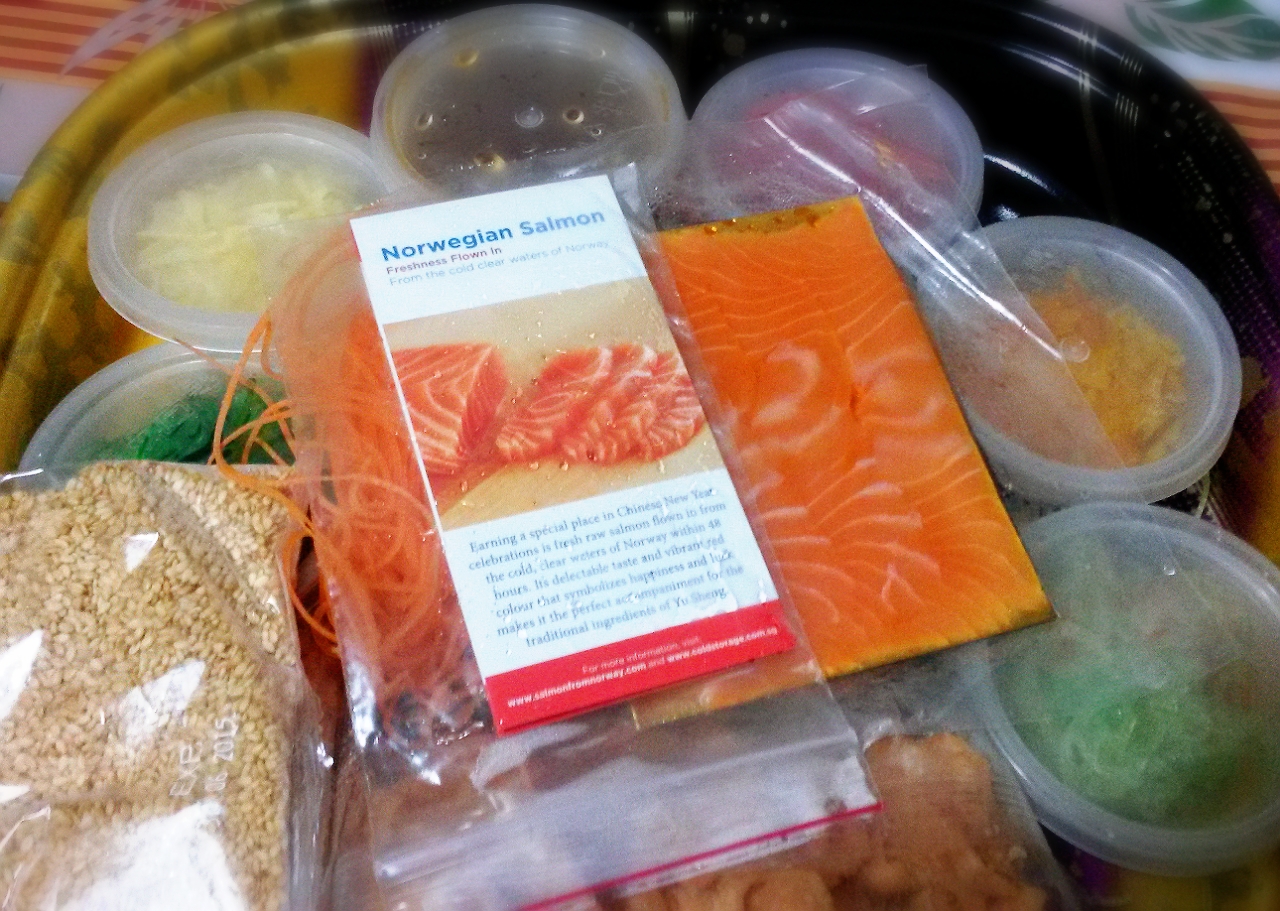 Delectable taste and vibrant colour that symbolizes happiness and good luck makes it the perfect accompaniment for the traditional ingredients of Yu Sheng.

Everyone gather at the table to commence the celebration with Chinese New Year greetings as follows:

1. Gong Xi Fa Cai – May you have a prosperous New Year.

2. Nian Nian You Yu – May you be blessed with abundance through the year.

4. Da Ji Da Li – May you have the best of luck and prosperity.

5. Jin Yin Man Wu – May you blessed with gold and silver

7. Man Dai Huang Jin – May the ground you tread on be laden with gold

Everyone to toss the salad together with loud shouts of “Huat Ah”, “Hong Yun Dang Tou” and “Feng Sheng Shui Qi” 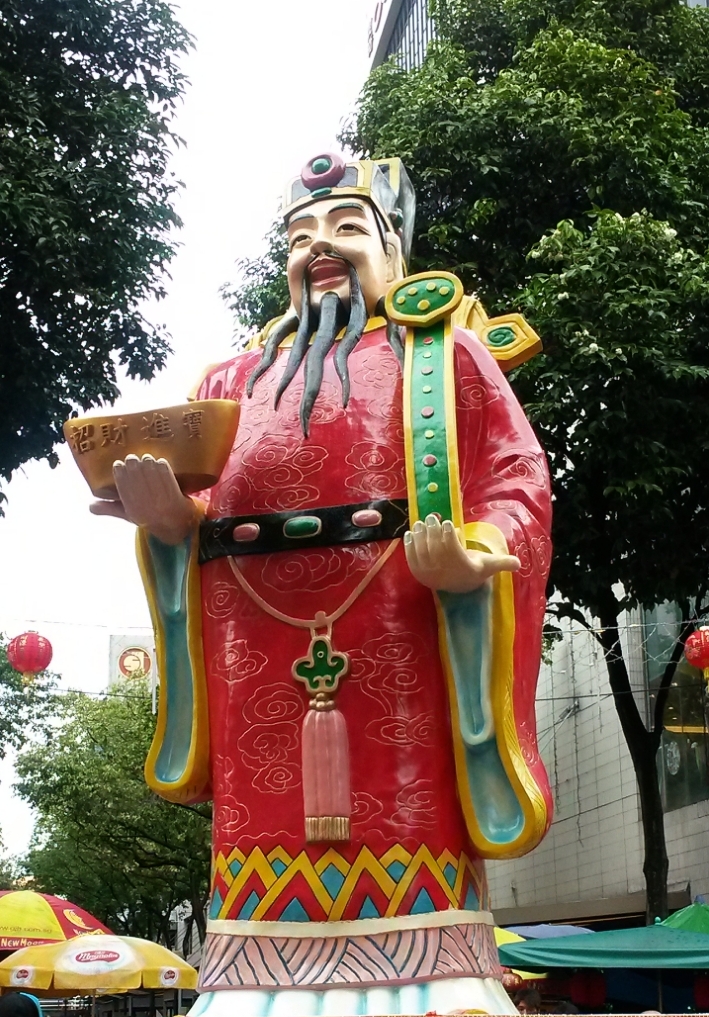 For more about Yu Sheng or Raw Fish Salad, check out here.

Yu Sheng a “must try” dish for every Lunar New Year.

But the question would be “where to try Yu Sheng this year:”

This has become an ubiquitous Singapore tradition of the Prosperity Toss to welcome the New Year for better fortune, good health and the list goes on.

A salad dish with thinly sliced fish most common “salmon” and a mixture of variety of colourful shredded vegetables with a variety of sauces and condiments added.

Traditionally, the fish served with Yu Sheng was mackerel, but other seafood such as abalone, lobster may be used instead.

The colourful choices of julienned vegetables such as yams or radishes are dyed red and green with food colouring. Included are white radish, carrots and cucumbers. Pomelo and red picked ginger are also added in some servings.

Crispy crackers symbolizing “gold ingots” is a must have ingredient.

Putien “Yu Sheng” has a flavorful twist of added seaweeds from the city of Putien. The ingredients combined representing all the blessings you would want in the New Year for many auspicious days ahead.

Credit goes to the comprehensive writeup about the “Four Heavenly Culinary Kings” and the owner and photographer of the attached photo.

Yu Sheng was introduced in Singapore by the Four Heavenly Culinary Kings . Master Chef Sin Leong, Master Chef Hooi Kok Wai and the late Chef Tham Yui Kai and Lay Yoke Pui some half century ago in the 1960s.

Yu Sheng was inspired by the Cantonese custom of consuming raw fish strips during the Lunar New Year.

Served as part of multi-dish dinner usually as an appetizer with its symbolism of “good luck”.

In practice Yu Sheng may be eaten during the fifteen days of the Lunar New Year.

In the early years, Yu Sheng was served with thinly sliced Ikan Parang now substituted with the most popular salmon.

Nowadays new ingredients are added with weaved symbolic meaning into the dish and its presentation.

Renri (人日, literally Human Day) refers specially to the 7th day of zhengyue(正月, the first month in the Chinese calendar). According to Chinese customs, renri was the day of creation of human beings. It is celebrated not only in China, but also other regions influenced by Chinese culture. In Chinese myths, nüwa (女媧) is the godness who created the world. She created the animals on different days, and human beings on the seventh day after the creation of the world.

History of Yusheng (from Wikipedia):
Fishermen along the coast of Guangzhou traditionally celebrated Renri, the seventh day of the Chinese New Year, by feasting on their catches. In Malaya’s colonial past, migrants imported this tradition; porridge stalls sold a raw fish dish which is believed to have originated in Jiangmen, Guangdong province that consisted of fish, turnip and carrot strips, which was served with condiments of oil, vinegar and sugar that were mixed in by customers.

Today’s colourful version of Yusheng and the practice of eating it on the seventh day of Chinese New Year appears to be unique to Malaysia and Singapore. Four local chefs are credited for developing Yusheng as we know it today. They named the dish “Lucky Raw Fish” and popularised it as a New Year delicacy. The chefs are Lau Yeok Pui and Tham Yui Kai, master chefs at Lai Wah Restaurant along Jalan Besar, and their good friends Sin Leong and Hooi Kok Wai. They had previously been colleagues at the Cathay Restaurant at Cathay Building.

Arranged on a large serving plate, the colourful array of ingredients include raw fish which is traditionally ikan parang or “mackerel”, shredded green and white radish drained of liquid, shredded carrots adding a bright orange tinge to the dish, pickled ginger, crushed nuts and pomelo. The ingredients are topped with various condiments including deep-fried flour crisps, crushed peanuts, sesame seeds, cinnamon, pepper and other spices. All at the table would then jointly toss the salad with a generous portion of plum sauce and cooking oil to add sweetness and taste.

Yusheng plays on the homonyms where yu means “fish” but enunciated appropriately, it also means “abundance”; and sheng means literally “raw” but enunciated appropriately, it means “life”. Thus Yusheng implies “abundance of wealth and long life”. In Cantonese it is known as lo sheng with lo also meaning “tossing up good fortune”. The tossing action is called lo hei, which means to “rise” (hei), again a reference to a thriving business and thus its popularity with businessmen during the New Year.

Step 1: All at the table offer New Year greetings.
Words: Gong xi fa cai meaning “Congratulations for your wealth” or Wan shi ru yi meaning “May all your wishes be fulfilled”.

Step 2: Fish, symbolising abundance or excess through the year, is added.
Words: Nian nian you yu 年年有馀 and You yu you sheng.

Step 3: The pomelo is added over the fish, adding both luck and auspicious value.
Words: Da ji da li.

Step 4: Pepper is then dashed over the ingredients in the hope of attracting more money and valuables.
Words: Zhao cai jin bao.

Step 5: Then oil is poured out, circling the ingredients to increase all profits 10,000 times and encouraging money to flow in from all directions
Words: Yi ben wan li and Cai yuan guang jin.

Step 8: After which the shredded white radish is added – prosperity in business and promotion at work.
Words: Feng sheng shui qi and Bu bu gao sheng.

Step 11: Deep-fried flour crisps in the shape of golden pillows is then added with wishes that literally the whole floor would be filled with gold.
Words: Pian di huang jin.

Step 12: All toss the salad an auspicious 7 times with loud shouts of “lo hei” and other auspicious New Year wishes.
Words: Lo hei which is Cantonese for “tossing luck”.
The ingredients are mixed by pushing them toward the centre, an encouragement to push on the good luck of all at the table.

Have an enjoyable toss with the salad!